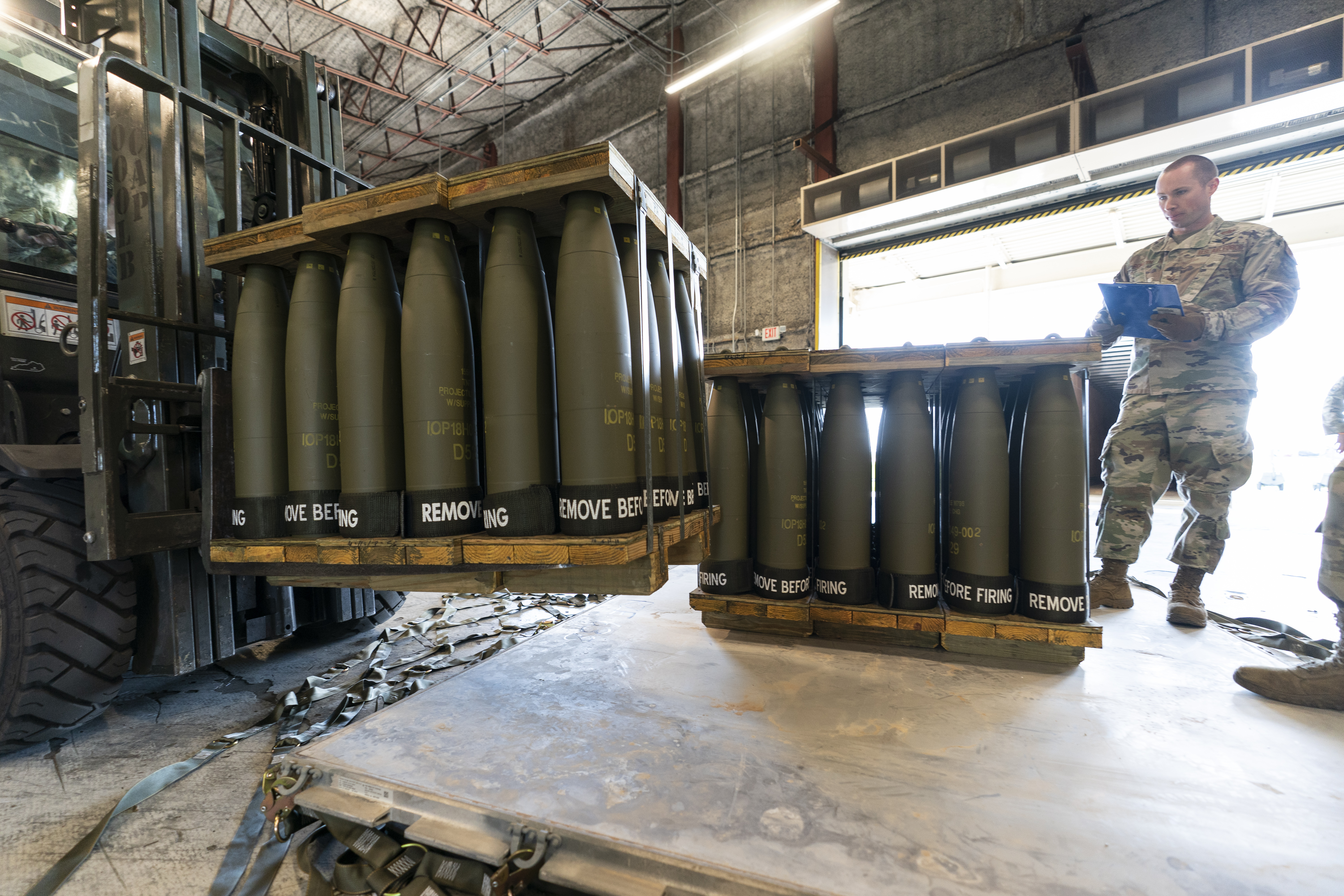 The intense firefight over Ukraine has the Pentagon rethinking its weapons stockpiles. If another major war broke out today, would the United States have enough ammunition to fight?

It’s a question confronting Pentagon planners, not only as they aim to supply Ukraine for a war with Russia that could stretch years longer, but also as they look ahead to a potential conflict with China.

Russia is firing as many as 20,000 rounds a day, ranging from bullets for automatic rifles to truck-sized cruise missiles. Ukraine is answering with as many as 7,000 rounds a day, firing 155 mm howitzer rounds, Stinger anti-aircraft missiles and now NASAMS air defense munitions, and thousands of rounds of small arms fire.

Much of Ukraine’s firepower is being supplied through U.S. government-funded weapons that are pushed almost weekly to the front lines. On Wednesday, the Biden administration announced an additional round of aid that will provide 20 million more rounds of small arms ammunition to Kyiv.

“We’ve not been in a position where we’ve got only a few days of some critical munition left,” Pentagon comptroller Michael McCord told reporters this month. “But we are now supporting a partner who is.”

U.S. defense production lines are not scaled to supply a major land war, and some, like for the Stinger, were previously shut down.

That’s putting pressure on U.S. reserves and has officials asking whether U.S. weapons stockpiles are big enough. Would the U.S. be ready to respond to a major conflict today, for example if China invaded Taiwan?

“What would happen if something blew up in Indo-Pacom? Not five years from now, not 10 years from now, what if it happened next week?” Bill LaPlante, the Pentagon’s top weapons buyer, said, referring to the military’s Indo-Pacific Command. He spoke at a defense acquisitions conference this month at George Mason University in Virginia.

“What do we have in any degree of quantity? That will actually be effective? Those are the questions we’re asking right this minute,” he said.

The Army uses many of the same munitions that have proven most critical in Ukraine, including High Mobility Artillery Rocket Systems, known as HIMARS, Stinger missiles and 155 mm howitzer rounds, and is now reviewing its stockpile requirements, Doug Bush, the Army’s assistant secretary for acquisition, told reporters Monday.

“They’re seeing what Ukraine is using, what we can produce and how fast we can ramp up, all of which are factors you would work into, ‘OK, how (big) does your pre-war stockpile need to be?” Bush said. “The slower you ramp up, the bigger the pile needs to be at the start.”

The military aid packages the U.S. sends either pull inventory from stockpiles or fund contracts with industry to step up production. At least $19 billion in military aid has been committed to date, including 924,000 artillery rounds for 155mm howitzers, more than 8,500 Javelin anti-tank systems, 1,600 Stinger anti-aircraft systems and hundreds of vehicles and drones. It’s also provided advanced air defense systems and 38 HIMARS, although the Pentagon does not disclose how many rounds of ammunition it sends with the rocket systems.

The infusion of weapons is raising questions on Capitol Hill.

This month, the administration asked Congress to provide $37 billion more in military and humanitarian aid to Ukraine in the post-election legislative session, and to approve it before Republicans take control of the House in January. House Republican leader Kevin McCarthy of California, who is seeking to become speaker, has warned that Republicans would not support writing a “blank check” for Ukraine.

Even with fresh money, stockpiles cannot be quickly replenished. Several of the systems proving most vital in Ukraine had their production lines shut down years ago. Keeping a production line open is expensive, and the Army had other spending priorities.

The Pentagon awarded Raytheon a $624 million contract for 1,300 new Stinger missiles in May, but the company said it will not be able to increase production until next year due to parts shortages.

“The Stinger line was shut down in 2008,” LaPlante said. “Really, who did that? We all did it. You did it. We did it,” he said, referring to Congress and the Pentagon’s decision not to fund continued production of the Army’s anti-aircraft munition, which can be launched by a soldier or mounted to a platform or truck.

Based on an analysis of past Army budget documents, Center for Strategic and International Studies senior adviser Mark Cancian estimates that the 1,600 Stinger systems the U.S. has provided to Ukraine represent about one-quarter of its total arsenal.

The HIMARS system, which Ukraine has used so effectively in its counteroffensive, faces some of the same challenges, LaPlante said.

“The thing now that is saving Ukraine, and that everybody around the world wants, we stopped production of it,” he said.

HIMARS production was shut down by the Army from about 2014 to 2018, LaPlante said. The Army is now trying to ramp up production to build up to eight a month, or 96 a year, Bush said.

HIMARS effectiveness in Ukraine has increased interest elsewhere, too. Poland, Lithuania and Taiwan have put in orders, even as the U.S. works to rush more to Ukraine. If the conflict drags on and more HIMARS ammunition is prioritized for Ukraine, that could potentially limit U.S. troops’ access to the rounds for live-fire training.

The Pentagon this month announced a $14.4 million contract to speed production of new HIMARS to replenish its stocks.

“This conflict has revealed that munitions production in the United States and with our allies is likely insufficient for major land wars,” said Ryan Brobst, an analyst at the Center on Military and Political Power at the Foundation for the Defense of Democracies.

The U.S. also recently announced it would be supplying Ukraine with four Avenger air defense systems, portable launchers that can be mounted on tracked or wheeled vehicles, to provide another shorter-range option against the Iranian drones being used by Russia’s forces. But the Avenger systems rely on Stinger missiles, too.

“We wouldn’t have provided these Stinger missiles if we didn’t feel that we could,” Singh said at a recent Pentagon briefing.

Belarus’ Lukashenko has made decision to invade Ukraine under certain conditions, expert says

Seo Blog Submitter Feb 5, 2023 0
Rep. Andrew Clyde (R-Ga.) cowers in terror behind an officer at the U.S. Capitol during the insurrection Jan. 6,…